Here’s how the Mustangs edged out Milan Friday night

First there was the Thriller in Manila, the Rumble in the Jungle, Rocky verses Clubber Lang, and Rocky verses Drago, but none of these compared to the slugfest at Paul Ward Stadium Friday as Huntingdon and Milan battled in the annual dog and pony show. It was the Mustangs that got in the final punch in a game that will go down as a classic. The Mustangs overcame a two-touchdown deficit in the second half to win over the Bulldogs 40-39. The Mustangs overcame three turnovers and lost an onside kick to edge out the win and the Mustang defense, which gave up 26 first-half points, held the Bulldogs to only 13 in the second half and had five sacks for the game.

Offense Was Huge for Both Teams

It was an offensive explosion for both teams as the two squads totaled 971 yards of total offense. The Mustangs who trailed at the half 26-20 and had 240 yards in the first half ended the game with 491 total yards for the game with 371 coming on the ground. Senior running back Brandon Lawton had the game of his career with 297 yards rushing on 17 carries and scored four touchdowns. Hunter Ensley had 64 yards on 10 carries and completed 4-8 passes for 120 yards in the game. Milan rushed for 308 in the game and passed for 172 and 480 total for the game. QB Devonte Herron ran 21 times for 161 yards but had minus four yards in the second half. Herron completed 8-15 passes for 172 yards in the game. 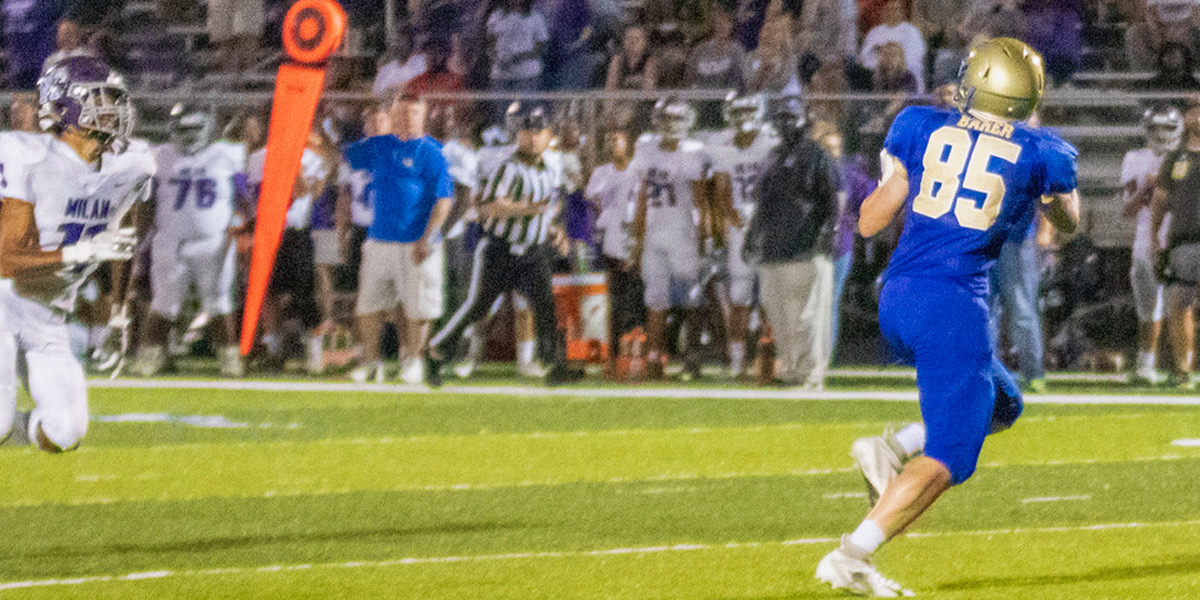 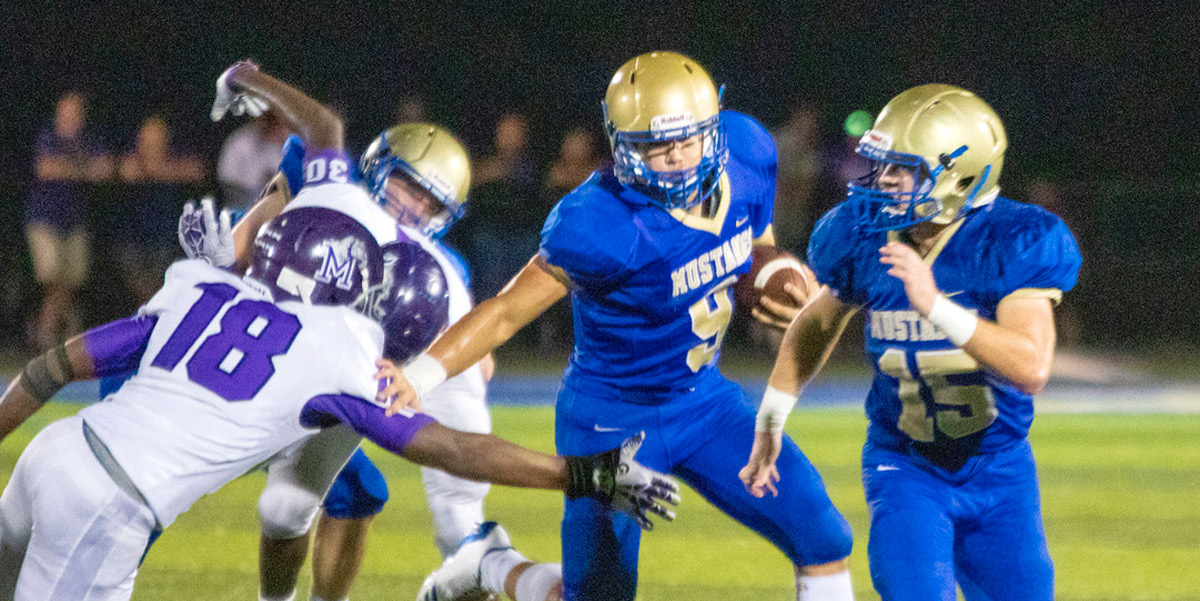 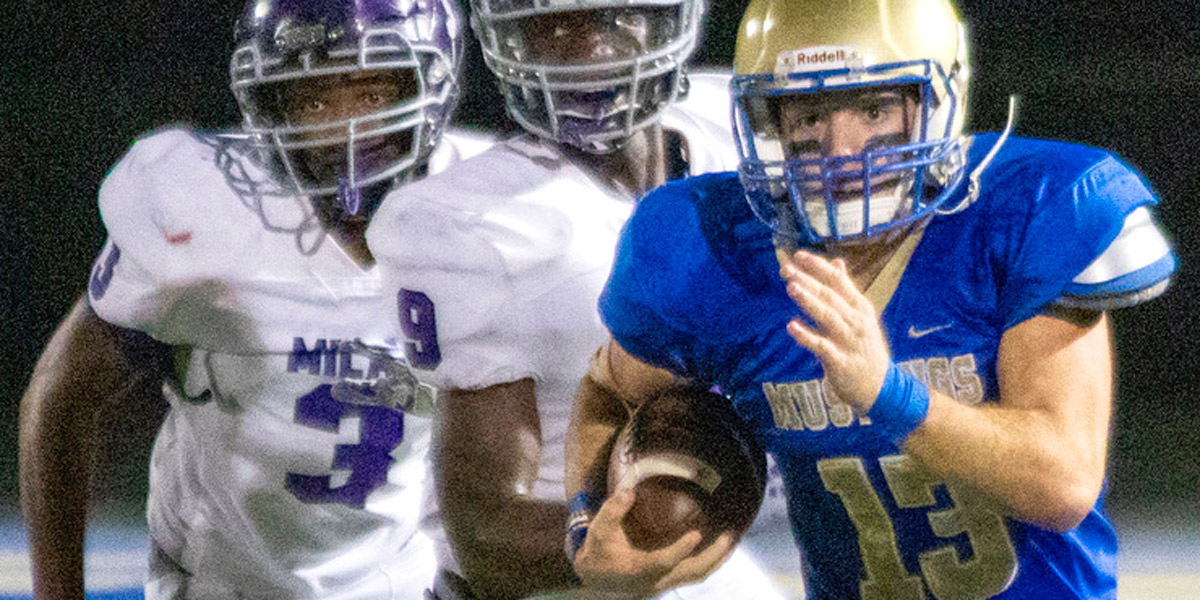 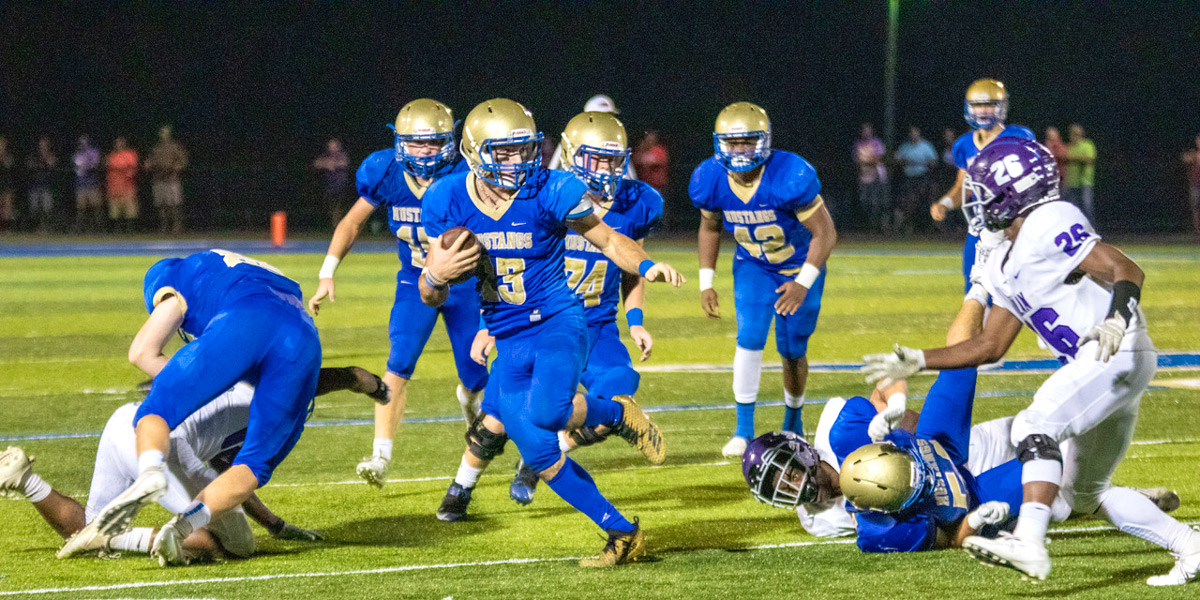 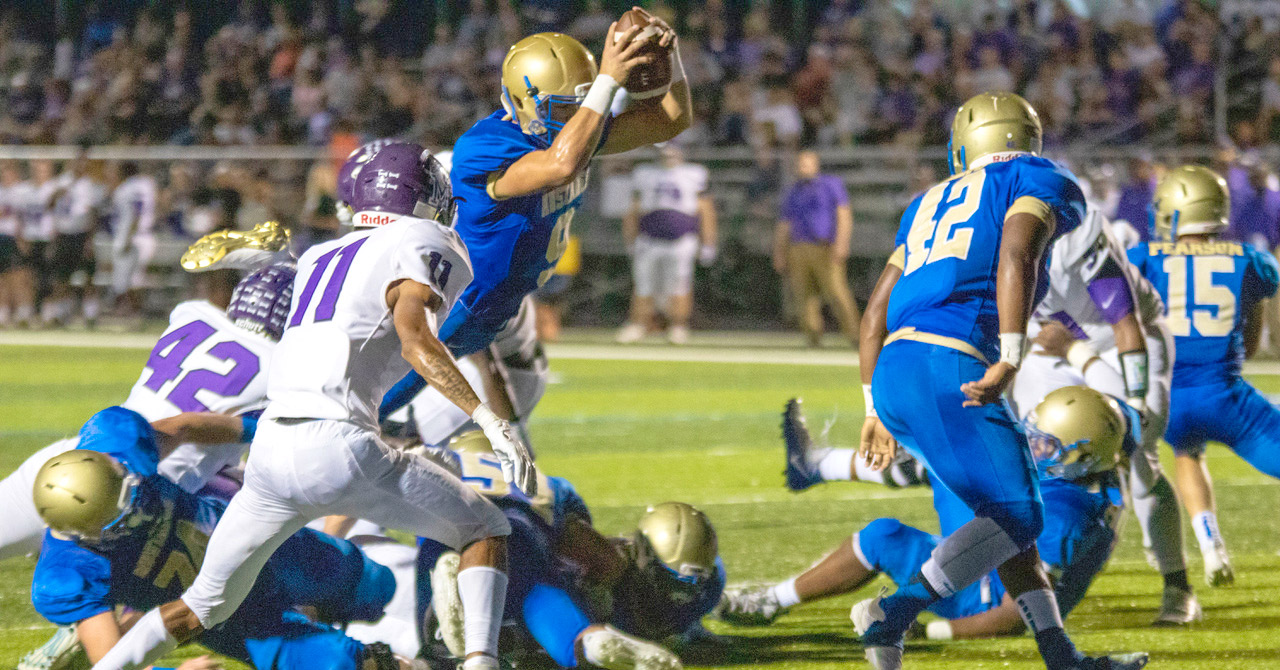 The Game Came Down to the Wire

The outcome of the game came down to the final 8:28 of the game. Huntingdon’s Cole Edwards had punted after a Mustang drive stalled at midfield with the Bulldogs leading 39-33. Edwards punt died at the Milan three and the Mustangs forced a Bulldog punt from the Bulldog 9. The punt was downed at the Bulldog 45 with 6:23 left in the game. Ensley ran for five on first down but Lawton was tackled for an eight-yard loss at the Bulldog 48. Faced with a 3 and 13, Ensley found a streaking Austin Baker running down the seam and connected for a scoring strike with 4:55 left in the game that tied the score at 39-39. Edwards who had missed two extra points and a Field Goal in the game knocked through the extra point which proved to be the winning point.

The Mustang Defense Held Out at the End

The final four minutes were not without drama as the Mustangs kicked off and the Bulldogs took over at their 20. After a loss of one and two incomplete passes, the Bulldogs punted to the Mustang 46 with 3:41 left in the game and the Mustangs only needing a couple of first downs to seal the win. Lawton gained 11 on third down and the Mustangs appeared to be on the way to the win with Milan out of timeouts. The Mustangs, however, committed their third turnover of the game as Konnor Pearson fumbled and the Bulldogs had a final shot from their 41 with 1:41 left in the game. On first down, Herron was sacked for a loss of eight by Devin McClerkin and Pearson. On second down McClerkin sacked Herron who was called for intentional grounding and left the game with an injury and on third down Ensley intercepted a pass and sealed the win for the Mustangs.

Milan Drew First Blood On A Fluke 80-yard Run, Then The Mustangs Answered

Milan struck first in the game with 3:33 left in the first as Herron raced 80 yards when the Mustang defenders stopped because they thought he was tackled but no whistle was blown and Herron ran untouched for the touchdown. Bo Mclemore blocked the extra point and the score stood at 6-0. The Mustang answered back on one play as Lawton sprinted 63 yards and an Edwards P.A.T. gave the Mustangs a one-point lead at 7-6.

The Mustangs upped their lead to 14-6 seventeen seconds into the second quarter on a three-yard run by Ensley and an Edwards extra point. Milan recovered a Mustang fumble at the Mustang 31 and Herron tossed a 31-yard TD pass on the next play to Cameron Tharpe. Sullivan Burke knocked through the P.A.T. and the score stood at 14-13.

The Mustangs pushed the lead to 20-13 on the next possession as Lawton ran eight yards for the TD and Edwards missed the extra point. Herron ran 65 yards with 2:53 left in the half and Mclemore blocked his second P.A.T. of the game and the score was left a 20-19. Milan then tried an onside kick which the Bulldogs recovered at the Mustang 46 and Herron connected with Anferney Lambert on an 18-yard pass and Burke gave the Bulldogs a 26-20 lead at the half.

The Bulldogs stretched their lead with the first possession of the second half in two plays as Lambert raced 57 yards on the second play of the half and a Burke extra point gave the Bulldogs a 33-20 lead. It took the Mustangs one play to cut into the lead as Lawton raced 74 yards on the first play and Edwards missed his second P.A.T. and the score was left at 33-26.

The Mustangs held the Bulldogs on downs and Lawton scored again on one play as he ran 57 yards and Edwards tied the score at 33-33 with 6:43 left in the third quarter. The Mustangs had a chance to take the lead on its next possession but Edwards missed an FG from 32 yards. Three plays into the final quarter Milan took the lead back on a 65 yards run by Orlandis Williamson and the P.A.T. was missed and the score remained at 39-33.

Then came the dramatic fourth quarter and the Mustang comeback began with a kickoff return across midfield that set up the final minutes of the game that saw the Mustangs rally and win for the third year in a row over the Bulldogs.

Undefeated Mustangs Are Off To Collinwood Next Week

The Mustangs hit the road this week and return to region action as the Mustangs travel to Collinwood for a 7 p.m. kickoff. The final four games for the Mustangs are all region games as they seek their third straight undefeated regular season in a row. The Mustangs after the win over Milan are now 6-0 for this season.